Return to the Island

Return to the Island

Most Hollywood blockbusters never live up to their sequel, but our recent 2nd trip to Lambay Island in a year was just a perfect day with a perfect host, Ms. Alice Liddal. This time around 26 leaders from the Beaver, Cub and Scout sections of the Malahide Sea Scout group travelled out on Eamonn McGrattans boat Naomi Leigh a 36 foot Cygnus Cyfish craft built in Valentia, Co Kerry. 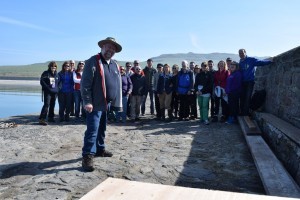 The vessel made a double trip to Lambay Island from Malahide Marina in about 30 minutes per trip and snugly tied up along the islands harbour wall.  Welcomed when we landed ,by Ms. Alice Liddal who took us on a personal tour inside the ramparts of this original 15th Century Castle that had being rebuilt and redesigned between 1904 and 1910 by the famous architect Sir Edwin Lutyens. His international work is recognised both here in Ireland, Britain and throughout the World and in Ireland include Lambay and the Irish War National Memorial Gardens at Islandbridge, Dublin.

Lambay can trace its history back to Neolithic times, but it was believed along with Rathlin Island that the Vikings sacked the monastic settlement in 795 AD.

With the glorious weather shinning on our backs we ascended to the highest point on the island, Knockbane at a 127 m taken in an extended lunch , as the views were breath taken out towards Howth, Portrane, Skerries, Rockabill and over the vast sea area ,east of the island. After lunch we got up on our feet and made 20 minute or so walk towards Tayleur Bay and point. A terrible unfolding tragedy took place here in 1854 when the RMS Tayleur on her maiden voyage from Liverpool to Melbourne, Australia foundered here on the rocks after losing her way in bad weather and 364 souls lost their lives as she sank on the rocks just below our feet. Just 100 souls were laid to rest on the islands small cemetery while others were never found and were presumed missing. The parish church of St. Andrews in Malahide on Church Road buried some of those lost souls. 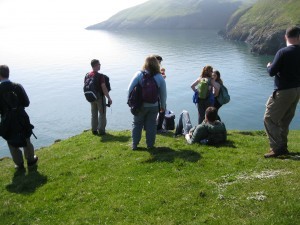 As we descended down the island towards the harbour fallow deer could be seen herding and thereafter, we snacked a little bit more, and before we departed, we visited the real tennis court and passed the coastguard cottage which now have self-catering accommodation. It wasn’t long before our skipper called us on board the Naomi Leigh and after lines cast off, fenders in, we made the short 30 minute passage back to Malahide Marina.

There aren’t too many sequels that live up to the first film but this second trip was truly a great sequel. Our many thanks again, to our Host Alice, The Baring Family and Eamonn McGrattan.